When Neston Parish Church was rebuilt in 1874, four carved sandstone fragments were uncovered in the foundations. A fifth had been used as a lintel of a window in the ringing chamber of the bell tower. These stones are now displayed inside the church 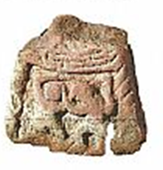 One of the stones was chosen for reconstruction from the lazar scan, and with evidence from Northern Ireland and the Isle of Man, added to a cross head from St John’s church, Chester, a life size model was made approximately five feet high.

This is also displayed in the church at Neston in traditional colours as it would have been in its original state. These fragments believed to be of a Christian style put Christianity in Neston at least as early as 930 AD when previously the only evidence was recognition of a priest in the town recorded in 1084 in the Doomsday records.

This tombstone is that of a knight, a high ranking nobleman, and is dated from the late thirteen century, probably between 1260 and 1280 AD. The order of knights depicted burials in a way with the equal-armed cross. Knightly orders were dissolved or the designs were re-jigged by the kings from 1300’s onwards. Therefore this tombstone has to be pre 1300 AD.

The centre shaft depicted, having a spike on the bottom, is a spear piercing the mouth of a gargoyle. The gargoyle’s head has huge ears out of which being the vine-scrolling that leads into the leaf and floret border edging design. This demon/gargoyle is a hybrid of the Green Man which represents earth or spirit of life. The carving of the hand and arm with buttons is unusually well preserved and very significant. The design of the rose from which the arm comes depicts God at the centre. The hand is holding a scroll that represents a record of the knight’s life and achievements. These achievements are set out in ‘badges’ inlaid in the circular recesses. Some of the upper recesses show traces of lead used for holding ceramic or brass representations whilst the lower ones may have been painted. Some may have been inlaid with precious stones. Te whole stone would have been painted.
Because of the excellent condition of this tombstone stone it is unlikely that it had been situated outside the church and was probably situated inside the original church with the knight buried in full armour.