All enquiries please to Frances Wookey 336 4433 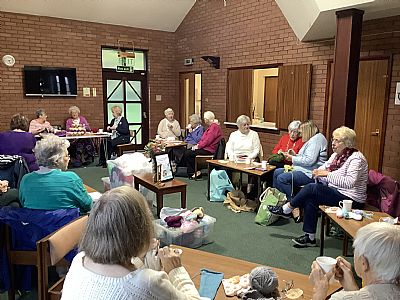 Our 'Knit and Natter' group of up to twenty ladies are putting their needles and creativity into good use by knitting an assortment of items for charity. The group was set up in February this year and although named ‘Knit and Natter’ it has a reputation of being more natter than knitting!! A portion of the members are of St Mary & St Helen in Neston but it is open to anyone whether you are a knitter or you just want to natter.
Since February the group has already completed three knitting projects, the first was colourful
woollen blankets and bonnets for new born babies at Arrowe Park Hospital Baby Unit on the Wirral.
Their next project was to knit 'Fish & Chip' baby jumpers. The jumpers are destined for African hospitals were there is an enormous shortage of clothes for newly born babies. Where sadly, mothers are so poor they wrap their babies in newspaper hence the name, 'fish and chip' jumpers.
The third project was to knit woollen hats for the Seamen's Mission, Liverpool. Seamen arrive at the ports of Liverpool from warmer climes and find our weather a little on the cooler side. The wooly hats are distributed to those seamen who arrive with only the minimum amount of clothing. They will be donated at the next Mother's Union Meeting when there will be a talk on the work of the Seamen's Mission.
For their latest project the group is knitting 'Teddies for Tragedy'. These lovely 10" Teddies will be handed over to the local Fire Brigade Stations when completed. They will then be handed out by the fire officers to young children who are victims of home fires for in many cases they will have lost all their toys.
The group has tremendous fun and there is a great feeling of fellowship as they sit around the table pausing only for a brief cup of tea or coffee. In the centre of the table stands a miniature ‘Madam Guillotine’ as a humorous reminder of a past time when women sat around knitting.

'Christmas Natter'
Monday 16th of December wasn't a normal afternoon for the 'Knit & Natterers, there was no clicking of knitting needles but the chat was just as loud, but in a festive sort of mood.
Knitting was abandoned for the day instead the tables were loaded with festive plates, cups, glasses, and decoration.
Another table was heavily laden with sumptuous festive food as the Helen room at St Michael's was thrown open to their Christmas party to members (pictures below).