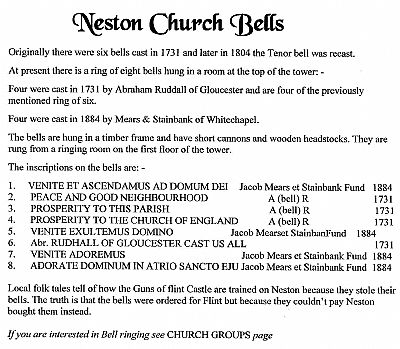 Grateful thanks to David Jones (Tower Captain) and Andrew Burrows for the pictures below.

Opening of a new Peal at Neston, Cheshire 1884

Before the PCC think the bell ringers have been taking advantage of the interregnum by installing a new ring of bells, the title of this article is taken from an historic article in the weekly publication Bell News, the precursor of The Ringing World (and yes, it has been a guest publication on Have I Got News For You!). I came across the article from 1884 which describes the opening of the new peal of bells on 23rd October in 1884 whilst      researching a dissertation for an MA in History. Volume 3 of Bell News, which covers the period from April 1884 to March 1885, includes 3 references to the bells of Neston; a notice of the work which was due to take place, a report on the opening of the bells, and, finally, the published details of the first peal rung at Neston. It is interesting to note that the report on the opening of the bells was also published in the Cheshire Observer on Saturday 25th October 1884. The first reference to the bells of Neston was in the edition of Bell News dated 12th April 1884. This is a brief article informing the readers of the planned re-hanging and augmentation of the old peal of six. It highlights that a new treble and tenor would be added and that the old fourth and tenor would be recast by Messrs Mears and Stainbank of the Whitechapel Foundry. Reference is also made to the poor casting of the old tenor which is described as ‘a very poor bell and badly tuned.’ The second article is much longer and describes the opening of the new bells and the dedication service on Thursday 23rd October 1884. It was published on Saturday 1st November 1884 and provides the title of this current article. As well as the description of the service and following festivities, it also briefly outlines the history of the augmentation. Detailing the original ring of six bells, it goes on to explain that one of the bells broke down early in 1883 and that on examination the bell-frame ‘revealed so dangerous state of things that further ringing of the bells was forbidden.’ A committee to consider the options was set up by the vicar during a vestry meeting in December of 1885. A plan to replace all the bells with a heavier ring of six bells cast by the Taylor Foundry in Loughborough was rejected following advice by the Rev Herbert A Cockey, ‘an experienced amateur ringer’ who suggested that four of the existing bells were retained, with four new bells to be added together with a new frame and fittings. The cost of the work was £370 and an appeal was set up to provide the necessary funds. The article explains that ‘an immediate and generous response was made both by the parishioners and by some friends not resident in the parish who are always ready to promote its interests.’ The work, carried out in ‘a thoroughly workmanlike manner’ was carried out by Mears and Stainbank, ‘the well-known bell founders of Whitechapel Road, London,’ and the new bells were all inscribed with their name as well as the year of casting (1884) and an ‘embellishment copied from a scroll which surrounds an arch in San Zeno, of Verona.’
The bells were opened with a ‘solemn dedication service’ on Thursday 23rd  October 1884, commencing at 3.30pm. It opened with the hymn ‘O God our help in ages past’, followed by ‘proper’ Psalms (122 and 150) and special prayers.
The article then goes on to say ‘the ringers then rung (sic) a short touch upon the bells, after which the choir and       congregation sang the hymn, ‘Now at length our bells are mounted’.’ A ‘very eloquent and appropriate sermon’ was delivered by the presenter of Chester Cathedral, Rev C H Hylton Stewart. The local band was not the first to ring on the bells as the Bromborough ringers were selected to open the bells. This is not as unusual as it sounds, as it was traditional to invite a good band to open new bells and at that time Bromborough was a    leading tower in Wirral. Following the service ‘about 200 of the principal parishioners adjourned to the schoolrooms, where they partook of a sumptuous tea, provided by Mr J Acton, of the Union Hotel, Parkgate.’ A number of speeches were given, including the vicar of Neston, Rev Canon Gleadowe, proposing a vote of thanks to the subscribers and complimenting his parishioners ‘upon the many improvements which had been made in the parish during his thirty years ministry.’ The article describes how he commented that ‘he looked upon the new peal of bells as a crowning act. In addition to the beautiful parish church they now had a beautiful set of eight bells, which he believed would be as sweet-toned a peal as any in the county of Chester.’ The final sentence of the article explains that the ‘proceedings were enlivened by selections upon the hand bells by the Bromborough men.’ The final reference to the bells of Neston in Volume 3 of Bell News is the publication of the first peal on the bells which appeared in the 31st March 1885 edition of the publication. On Saturday 14th March 1885 the Chester Cathedral Society rang a peal of Treble Bob Major in the Kent Variation (now known as Kent Treble Bob Major) in 3 hours and 5 minutes. Regular readers of my occasional articles may remember that this performance was repeated on Saturday 13th March 2010 to mark the 125th anniversary of the first peal on the bells. The details of the first peal are as follows:

Composed by J J Brierley and Conducted by Freeman Ball
First peal ever rung on the bells.