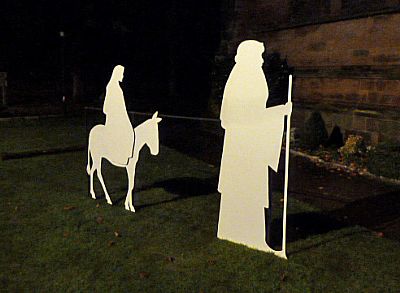 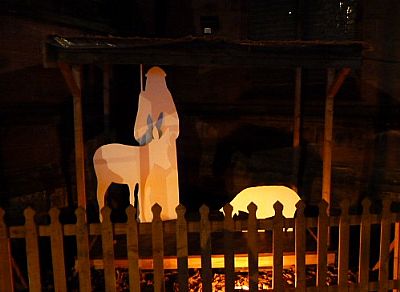 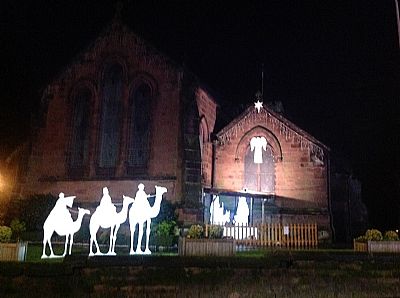 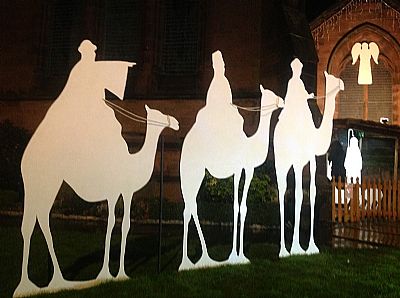 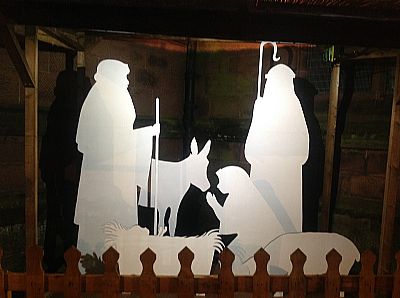 The Nativity scene was the idea of Peter Rossiter, former Churchwarden of the Anglican Churches of Neston. Peter wanted to create a scene that told the story of Christmas outside the church but within the grounds of St. Mary and S Helen’s Church. The inspiration was to create a scene that could be created in silhouette form and light up in the evenings. On Tuesday mornings at St Mary and St Helen’s a group of men from the parish gather around 9.30am most weeks to look at what maintenance works are required around the three Anglican churches of the parish (volunteers always welcome!). During one of these morning meetings (or was it over the lunch at one of our local hostelries that follows; perhaps?) Peter talked through his idea.

The principle was embraced and one of the team, Terry Abel begin to drive the project forward by creating the figures. Inspired techniques were used to create life size images for the scene. Many hours of work have created the scene now present outside St Mary and St Helen’s Church on the North-East corner. The illuminate scene is planned to co-ordinate with Neston’s Christmas lights switch-on this Saturday 5th December between 5.30 and 7.30pm, from then on they will be illuminated between 3.30pm and 10.00pm daily.

Saint Francis of Assisi is credited with creating the first nativity scene in 1223 (a "living" one) intending to help people in their worship of Jesus the Christ child, having been inspired by a visit he had made to the Holy Land where he had been shown Jesus's traditional birthplace.
Rev'd Alan Dawson